It is planned to publish the under 11s fixtures and the updated under 12s fixtures for April/May (to include games that weren’t played in March) by Friday evening at the very latest. Apologies for the delay in getting these out.

Charity tournament in aid of The British Heart Foundation.

We are organsining a fundraiser charity event for the British Heart Foundation Charity on Sunday 3rd June 2018 at Goals Blackheath, West Midlands B65 OQX.
See Charity Flyer attachment please can you posted on to your social media sites and paltforms.
We are looking for teams and the communities to take part in a BHF Charity Event and sponsorship/company vouchers for the charity raffle.
On the day we will have children playing football which will be 8,9,10,11,12,13,14,15,16  years old and also adults teams taking part also. So please come and along and submiit your teams in for a great worthy cause.
We will be having food and a charity raffle on the day.
Anytime time that you can give will be invaluable, because every pound raised from our fundraising volunteers will help fund vital research and identify new treatments that could help save lives.
“Heart disease is heartless. Too many lives are lost in the West Midlands each year, and we’re determined to do everything we can to protect more families from this devastation.
Looking forward from hearing from yourself and Lets Make a Difference Together
Kind Regards,
Gurcharan Bhujhangy
07762521584
FIGHT FOR EVERY HEARTBEAT
British Heart Foundation is a registered Charity No. 225971. 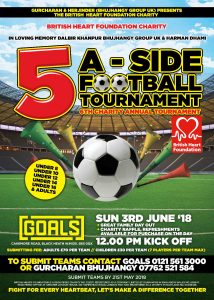 Anyone whishing to take part please follow the instruction 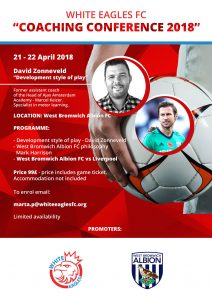 The next team/fixtures meeting will be on Thursday 22nd March 2018 – 8pm start at Bloxwich Memorial Club.
This is a very important meeting as we prepare for next season.
At the meeting, representatives from Staffordshire FA will lead a presentation and discussion about the introduction of the use of the FA player registration database, Whole Game System (WGS), for ALL player registrations for next season. This is an online system that requires all teams to register before they can register players.
It is vital that every team has a representative in attendance who will be responsible or involved in player registration for the coming season.

Being held at Pulse Wedsnesbury from 10am on Saturday 14th and 15th July 2018. Entry fee £25 per team. Each player will receive a medal and each winning team will receive trophies.  Guaranteed at least 4 games of football per team. Interested then please call Clive on 07853 159019 or email clivewba@hotmail.co.uk

Congratulations to both teams for an entertaining cup final at Rushall Olympic FC on Wednesday evening.  Thank you to all the spectators who attended to support the teams.   All players were a credit to their teams and Walsall Junior Youth Football League.   A big thank you goes to Jackie and Sally (daughters of the late Kevin Hogan)  and grandchildren Tom and Will for attending to present the cup and medals, thanks also goes to the match officials: Andrew Dickson, Rob Forrester and Luke Foxley.

Many congratulations to the following teams who were collecting their divisional awards during the evening: U16’s Tipton Youth Lions, Sutton Coldfield Town AFC, Lodge Farm Blues and U15’s FC Bustleholme, well done to all of you.

Golden Boot have three tournaments coming up please click on the links for more details and prices.

Congratulations to both teams for an exciting cup final at Chasetown FC on Sunday afternoon.  Thank you to all the spectators who attended to support the teams.   An entertaining game and all players were a credit to their teams and Walsall Junior Youth Football League.   A big thank you also goes to the match officials: Ashley Davis, William Bartlett and Kai Crosbie-Fletcher. 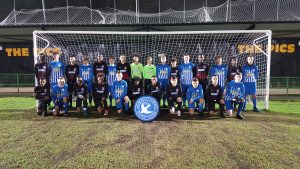