Unfortunately, the league have to call a “blanket ” weekend again this Sunday 17th December.

All 9 v 9 centres are OFF along with Sandwell, Wolverhampton and Walsall Council pitches.

May I take the opportunity to wish all the Officers of Clubs, Players, and Parents A Happy Christmas and Best Wishes for the New Year. 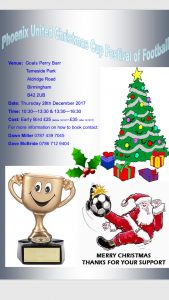 Please find attached an invite to teams in your league the 2018 Hessle Sporting Tournament on Saturday 7th and Sunday 8th July 2018. If you could forward to club secretary’s or team managers it would be very appreciated

Last year we had almost 200 teams from all over the North of England as well as teams as far afield as South London.

New for 2018 will be a World Cup theme with up to 3 competitions to play for in each age group with the HSC World Cup Gold, Silver & Bronze.

As well as all the usually stalls, bbq and large scale bouncy castles.

We have received notification that all Sandwell council pitches are again off this weekend (17th December 2017).

Any 11 a side teams who use Sandwell Council pitches will also be unable to play on their pitches.

The committee will make further announcements about other fixtures, if they are in doubt, nearer to the weekend.

The under 13 Cup Final scheduled for Wednesday 13 December has been called OFF because of the weather.

It is not necessary to send in postponement forms for the 9 v 9 or 11 v11 matches.

The 9v9 Centre at Kings Hill is also OFF tomorrow Sunday 10 December.

Mini soccer is also off at Bustleholme.

The Cup Final scheduled for this evening is off due to the weather conditions, it will be re-scheduled in the new year.

Our next Cup Final events are: