Please find below a link to the slides from the presentation at the league meeting last week.

All attendees at Grace Academy each Sunday are reminded that a 5mph limit exists. The car park is particularly busy on a Sunday with football, church and school users, mainly children. There is a one way system that is clearly marked and ‘in’ and ‘out, gates. The ‘out’ gates open on approach.

At Grace Academy and all other centres, please can all drivers and walkers be aware of other users of the facilities and take care at all times following instructions and steward directions when given. Given the centres are often very busy it would be useful if teams could car share wherever possible to reduce congestion.

Thank you for your cooperation.

Letter from League Chairman and Committee

Howard Fullelove will be unable to process any transfers from Thursday 12th to Tuesday 17th October.

if you post the through his letterbox he will deal with the after the 17th.

Please return all cups/ trophies at the next fixtures meeting on Thursday 19th October at Bloxwich Memorial Club. Please ensure they are engraved and cleaned so they are ready to be presented in November and December for this season’s competitions. Many thanks. 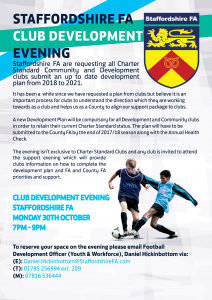